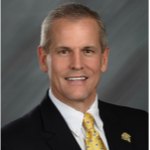 John Bartels, President
​John Bartels has been on the Carlin Nalley Foundation Board of Directors since 2009, and has served as President since 2013.
John is a 1985 graduate of Lisle High School, and a 1989 graduate of the University of Illinois in Champaign-Urbana with a degree in Chemical Engineering, and has worked as an engineer and manager at BP for the last 26 years.  He lives in Lincoln Park with his wife and two daughters.
Quote: “I am extremely proud to be a graduate of Lisle High School, and honored to serve on the Board of this unique foundation that has provided dozens of significant academic scholarships to highly achieving Lisle High School graduates and that brings together the Lisle Alumni for events to celebrate our common history.  My experience at Lisle High School was outstanding thanks to many dedicated educational leaders like Carlin Nalley and their commitment to provide opportunities to bring out the best in Lisle’s students.  As Board President, I aspire to lead the Carlin Nalley Foundation in growing its role in
rewarding excellence among Lisle High School students and cultivating alumni support to do so.”

Jay Grochowski
Jay Grochowski (Class of 1977) is a founding member of the Carlin Nalley Foundation and served as its President before stepping down after his second term and moving to a Director position.  Jay is in sales with Sharp Electronics Corporation of America and is a graduate of Indiana University.  He and his wife Rhonda have two children, Lauren and Stefan.
​
Quote:  The Carlin Nalley Foundation celebrates the graduating seniors who honor our school, community, and alumni with their achievements, citizenship, and dedication.  Our Foundation and each scholarship, is named after a faculty member or alumnus who embodied these values.  We are proud honor the students and faculty, past, present, and future, who make our high school a special place.

Alan Nalley
Alan Nalley (Class of 1986) has served as Treasurer for the Carlin Nalley Foundation since 2008.  Alan graduated from NIU and passed the CPA exam in 1991.  He also has an MBA from the University of Chicago.  Alan works as a Finance Manager at BP in Chicago, Illinois, and lives with his wife (Denise) and daughter (Katie) in Plainfield.
​
Quote:  "I believe the unique experience of growing up in Lisle has formed a strong connection across alumni.  I am proud to be a part of this community and generate support for current outstanding LSHS graduates."

Robert Taylor
​​Robert Taylor ('89) has been on the Foundation since 2008, serving as a Director and now as Secretary.  He is a Benedictine graduate and has Master's Degrees in Developmental Psychology from ISU and Curriculum from  North Central, as well as a CAS in Nonprofit Leadership from Northwestern.  Robert is a National Board Certified Teacher and Golden Apple Fellow teaching in the Palatine School District.  He and his wife Marcy live in Lisle with their son Jack.

"The Carlin Nalley Foundation is a reflection of the culture of our town, notably our strong family and educational values.  There are
​ no other alumni based foundations in our area giving anything like our diverse scholarship offerings, and that speaks volumes."

Bill Buchelt
Bill Buchelt (Class of 1984) has been serving as director on the foundation since 2012. He is a graduate of Illinois Benedictine University (Class of 1988) with a degree in marketing and economics. Since 1988, he has owned and operated Elan Photography in Lisle. He presently lives in Lisle with his wife, Nicole and their four children; Mackenzie, a senior at Valparaiso University, Benjamin, a sophomore at Illinois State University, and Alison a senior and Jordan, a freshman at Lisle High School.
"I am very proud and honored to be a member of the foundation named after a man who is very influential in my life when I was growing up, Coach Nalley. In a cause that I absolutely believe in, this foundation serves to support the graduates of Lisle Senior High School in their continuing education endeavors."

Don Krause
​Don Krause (class of 1972) was voted on to the Foundation board in 2015 & is currently the Director of Communications. He is a ’74 grad of the College of DuPage and has owned his own advertising firm since 1988. He is also a business broker firm under the Midwest Group umbrella. Don donates his time & talents to the Bronzeville Dream Center in Chicago. He lives with his wife Kathy in Lisle and has 2 children Katelyn & Donny.
Quote: “Being part of an organization with Coach’s namesake is quite an honor. I pray that I serve with the same selflessness that Coach Nalley has lived”
Copyright © 2020
UA-80891205-1